By Lyn Cikara on June 14, 2019 in Leadership Development 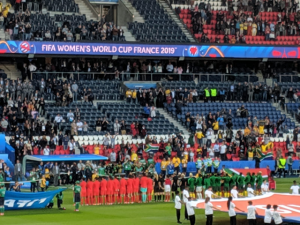 Last week the South African Women’s football team made their debut on the World Cup Soccer stage. They came out fierce and scored the first goal in their very first match against Spain. They didn’t win either of their first games which were against more established and seasoned teams. Their last game was against the formidable German team. These fine young South African women showed their unrelenting effort in the face of huge competition. In spite of the odds, they only had a total of 4 goals scored against them. They remained focused and determined, not letting their losses deter them from their vision of victory and making a noticeable entrance into World Cup Soccer. In spite of this team knowing that they were at the end of their world cup experience and going home, they played their hearts out with fierce energy, not letting up even until the last second of extra time. That is the way to go out blazing! As a South African, I couldn’t be more proud of their accomplishment.

In a competitive market, many businesses are in the same position. Being at that entry level in business is hard, so maintaining team morale and a strong vision are essential.

If a team from a country not known for women’s soccer were able to keep fighting against the odds on an international stage, you can too.

I support leaders to keep their teams engaged and winning, even when others don’t believe you can do it. Contact me at lyn@lyncikara.com for a boost of your fighting spirit.